The Signal is Strong started out as a presentation at Van Eyck in 2016, where I was asked to talk about what inspires and informs my work. I wanted to share some of my thoughts on music culture, broadcasting, shoutouts and self-presentation, but instead of only talking about it, this presentation is an attempt to 'do' or 'embody' this in the format of the presentation itself.

Late 2017 an (extended version) was presented by invitation of Sparta at the Kunstakademie in Düsseldorf. The audio only re-recording has afterwards also been broadcasted at Sparta Radio as part of the exhibition Something Stronger Than Me* at Wiels, Brussels.

Originally there were also videos and images involved, and as often I include quotes, citations and recordings of many others; from a fragment of a Spike Lee movie to an audio performance by Nancy Holt. For now, here you'll find an excerpt of the original text, and an audio recording of the 2017 version as a download option.

The Signal Is Strong

Looking for a poem by Emma Hedditch, We Are the Signs and the Signals, all I got was a YouTube video of Busy Signal, and his song 'Text Message'.

I'd like to make jokes about Terry Riley and Teddy Riley. Or no, it's not so much a joke, I just enjoy mentioning both of their names in one sentence. Terry is a minimal music composer, who's 82 years old now. He lives in the hills of California, has a long grey beard, and makes lengthy compositions that are trance like, influenced by Indian classical music. And Teddy is the R 'n B producer (known for the hit: I Like The Way You Work It) who invented the New Jack Swing genre in the late 80s. They are seldom mentioned together. But when I do so, and someone recognizes both of them, for me half of a friendship is born.

Besides, Terry and Teddy are not that many handshakes away from each other. This images proves it. 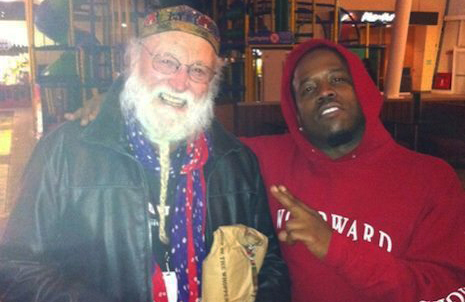 Big Boi and Teddy must have also met each other once… But Terry and Teddy? That I'm not so sure about.

I don't expect that Emma Hedditch and Busy Signal know each other. But Emma is mentioned in the last edition of 'Texte zur Kunst' I was reading, about Poetry, where an essay refers to a poem that she emailed in 2015 to an unknown number of recipients. We Are the Signs and the Signals. I wanted to find that poem, but when I went searching for it, all I got was a video of Busy Signal, a Jamaican dancehall artist.

If I read the word signal somewhere these days, I pay extra attention. I'm not sure if I want to define the meaning of 'signal' exactly, but the word pleases me somehow. I'm wondering how to send out a signal myself, and am thinking of who is able to receive it, who is receptive?

(In the meantime, Terry Riley is playing in the background)

In an interview with The Wire, the artist and musician Dean Blunt is asked if his use of pop culture imagery and corporate iconography is deliberately coded, to elicit a particular response. No, is his answer, and I quote:   ''The worst art to me seems so intentional, I just like to project the things I find interesting. I'll give you one example. On the Narcissist II, the front cover says: Proibito. Now, anybody from this city who grew up in a certain area knew that you went to Proibito, a fashion shop in Central London, on boxing day, to buy anything just so you could get a Proibito bag to put your schoolbooks in – just so you could look as if you bought something at Proibito as a form of aspiration and walking around. So certain people, when they saw that cover knew exactly what it meant and why it meant something. That wasn't intentionally coded but it definitely made the world a little bigger for me.''

Being at Van Eyck confirmed again what I already knew, but never articulate that much. Music is where I'm most at home, what excites me, keeps me going, and functions as a prism to look into other subjects, such as fashion, politics and performance. Visual art has always felt more distant to me. It often surprises me how there seems to be a lack of sensitivity for music in the art scene – when I think of gallerists, curators, and awkward museum openings. I won't forget how a group of curators from Stedelijk Museum seriously, or serious ironically, requested Eye of The Tiger on a party where I was Djing once. But I've also witnessed the opposite. Music nerds geeking out on rare records, the 'bro culture' of Boiler Room and electronic music festivals. And then there's the programming of music, which has more to do with negotiating with booking agents instead of a dialogue with the artists involved. Every scene has its flaws. So I never went all the way for it – I'm not one of those hardcore record collectors, I've never played an instrument and I stopped writing music reviews a long time ago. Music is too close, I didn't want to taint it with my words who are unable to capture it. And on a daily basis, I prefer to work in silence.

Most of the energy and inspiration I get out of it is not purely listening.

The context of where certain music emerges, and what it is trying to signal, how the culture surrounding it behaves – is equally important to me.   As DJ Sprinkles says, ''House is not so much a sound, it's a situation.''

There is a joy in navigating through endless networks of music, often based on loose associations; the way a record cover looks, where another suggestion on YouTube will lead me, what a title reminds me of, or simply the small sound of clincking ice cubes in the song Icy Lake.  So from listening to a record by Hype Williams I might think of the video director with the same name, who made these futuristic videos for Missy Elliott in the late 90s, and perhaps I end up with the poem 'For Colored Girls (The Missy Elliott Poem)' by Ashlee Haze, which is featured on the opening track of the new album by Blood Orange.

But at another moment I could get into the Art of Noise, think of the voices on Opus 4, and how that would go well with Stravinski's 'Ovsen', which is just 45 seconds long.

Within music I can be hyper specific, and who can read it will read it, but if not then that's no problem – it is still possible to enjoy it, without any knowledge beforehand.

Since I hardly put a label on the music I listen to, it's difficult to make a statement about it. As Mary Overlie says, ''Labels are powerful things. Labels are dangerous. They are also necessary to our survival and sanity.'' So in my radio show, apart from selecting and playing music, I just mention and give a shoutout here and there. I mention the titles of the songs, the names of the artists, the names of people who are listening – and from the sounds combined with those mentions, a certain field emerges, a space to belong to.